Some of the early snowdrops are looking a little the worse for wear but many are still putting on a grand display despite (or perhaps because of) the winter chill. The clump of ‘Cowhouse Green’ (green tips to petals) has increased in size and I have invested in new snowdrops including ‘Polar Bear’, ‘Gerard Parker’, ‘Reverend Hailstone’ and, best of all, ‘South Hayes’, so the number of snowdrops has swelled to more than 60. I have been inspired by a visit to Colesbourne Park, a magnificent snowdrop garden filled with so many temptations. The little Iris reticulata are still putting on a grand display, especially a clump of pale blue ‘Sheila Ann Germany’ in the bed alongside my drive. I have also just invested in a few Polar Ice, another very pale Iris reticulata, and Pauline, a very dark blue. 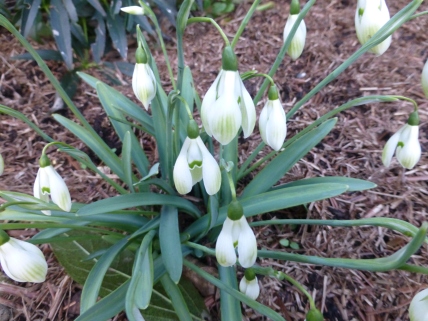 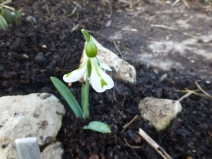 Crocuses have popped up all over the garden. Crocus tommasinianus ‘Whitewell Purple’  has spread widely in the grass under the apple tree and the small group of the delicate Crocus sieberi ‘Tricolor’ has enlarged. I am also enjoying Crocus chrysanthus including ‘Cream Beauty’, ‘Herald’ and ‘Blue Pearl’. Crocus ‘Yalta’, which I planted last autumn, has come into flower. I found the silvery-blue outer petals lightening up a dull corner. However the flowers were closed so I did not see the dark purple inner petals. I must check again in the sunshine.

Winter aconites are almost over but the Lenten roses (Helleborus orientalis) are looking good although I have lost the doubles (I actually prefer the less fussy single flowers) and the clump of Helleborus × hybridus ‘Harvington Black’, a dramatic dark purple, has decreased rather than increased in size. The naturalised narcissi in the grass under the apple trees are coming into their own, a sign that spring really is just around the corner.

The choice alpines from Craigiehall Nursery lived up to expectations. They arrived in perfect condition, beautifully packed, and I had a lot of fun planting up a pot with a combination of Polygala calcarea ‘Lillet’, Salix hylematica, Veronica prostrata ‘Nana’, Saxifraga federici-augustii subsp. grisebachii , Saxifraga ‘Jaromir’, Vitaliana primuliflora ssp. praetutiana and Penstemon davidsonii menziesii ‘Microphyllus’. I have probably crammed in too many tiny plants – I may have to invest in another pot.